Back to Blog Home

Alive and Thinking in Cyberspace: Pam's take on just about everything

Shandy-esque, this business of blogging with the Berlin Alexanderplatz radio tower out the window and part of my heart still in San Francisco at the RWA National Conference two weeks ago…

But I have only myself to blame.

I timed this Berlin vacation, you see, at least in part so that we’d be leaving on the Monday directly after National this year. I was a little nervous about the conference. And so I figured that all the scurrying about to prepare for 10 days in Europe would keep my mind off my hesitations and insecurities about my writing career.

A published writer? With insecurities?

Well, if you’re supposing that having a cover and an ISBN on your manuscript will drive away your personal doubts and demons, perhaps there’s a bridge across San Francisco Bay that I can sell you, or a hideous radio tower half a world away…

And of course (I hasten to add) there were a hundred other reasons to schedule this trip for now — things we didn’t want to miss at home at the beginning of the summer and into the fall.

But my confession of neurotic insecurity stands, even if the avoidance/distraction strategy re National turned out quite unwarranted.

I had a lovely time at the conference — best ever, jn fact, even if I didn’t have a new book to show around (though I did have a spectacular Wax-Creative-designed bookmark for my forthcoming November The Edge of Impropriety). Or perhaps I had such a good time because I got to be a bit more of a consumer of other people’s stuff. But more on all that later, after I get to the truth not yet quite universally acknowledged (but getting there) that the best thing at the RWA National Conference isn’t at the conference at all but the Beau Monde conference the day before.

The Beau Monde is a special interest chapter of Romance Writers of America — with a wonderful membership of hundreds of writers of Regency-set historicals who relish the fine points of historical accuracy. And once a year, at our conference the day before RWA National, we meet to share and celebrate those fine points, and to party like it’s 1799 as well.

Or (this year) like it was 1599 or 1899 or 50 BC — because for this year’s conference we teamed up with the Hearts Through History chapter (all periods), thanks to the efforts of chapter president Kalen Hughes, who, in addition to being a smart, talented writer, is frighteningly energetic and informed about all matters historical.

(Kalen’s a second-generation historical re-enactor, which is fascinating in itself: you can find out more about what re-enactors do here). Seeing Kalen in a period gown she’s made herself is always a delight and an astonishment for me — much of the scene in The Slightest Provocation where Kit gets Mary out of her pistachio-green chambray stems from a discussion I had with Kalen about the placement of buttons and the weight of the fabric of a gown she wore at the Beau Monde conference in 2005.

So not only did we have our usual excellent workshops on all things Regency (I loved Courtney Milan‘s, on women’s property rights, and learned a bunch), but we had guys in costume showing us how to load black powder muskets and even some cute bare-legged Romans and barbarians, showing us their swords and shields and telling us how they were made. 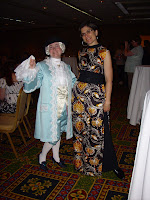 Not to speak of the Soiree, at night, which many of our members attend in historical costume, and which I do not (having exactly the wrong body type for Regency costume — ah well, perhaps I should lighten up, one way or another). Anyway here’s a wonderful picture of the year’s best costume, imo, on the little Cherubino Amanda McCabe, who fearlessly attacks every historical period in her books, and writes about it all on the Risky Regency blog. The lady in full 70s regalia is her sister risky, Regency author Megan Frampton.

And if I can get a photo of my friend Jane George and her 12-year-old daughter Helen, both of them light as sylphs as they floated through the Regency dances in their white dresses, I’ll post it. Every time the dancers clapped to mark the end of a dance figure, Helen gave the most delicious, heart-lightening smile at finding herself in Pride and Prejudice Land, and everyone else in the room smiled with her.

But remembering one little girl’s fantasy evening reminds me of another — my Berliner grand-niece Maxine, who told me in half-German/half-English yesterday that her most favorite color (even than pink) is “glitter.” Gotta go — we’re on our way to the Tiergarten…

But do come back soon, for more about National (I love it when somebody exclaims You’re Molly Weatherfield??).

And for stuff we saw, did, ate, and drank in Berlin as well.

This site uses Akismet to reduce spam. Learn how your comment data is processed.

Other Places I Hang Out Online